Cuban Music in Santiago de Cuba is the heart and soul of the city. It fills the air day and night. You can hear music pulsing from open doors and windows as you walk through the city’s colourful streets, and on every corner you are likely to come across a group of musicians entertaining spectators with upbeat rhythms and hypnotic beats. Many passers-by stop to enjoy the music, while others sing along or move their body to the drum beats.

If you’re planning a music holiday in Cuba, Santiago is the best place to fully immerse yourself in the Cuban traditional music scene. Besides being home to several music venues and lively annual festivals, Santiago is also known as the birthplace of Cuban Son, a genre which is the precursor to what we now know as salsa and which was made famous around the world through the Buena Vista Social Club.

You won’t be able to resist the urge to dance to Cuban music in Santiago de Cuba. And if you’re a natural musician, you will be tempted to grab an instrument and play along. As you are about to find out, it’s possible to become more involved in Santiago’s music scene if you want to be more than just a spectator.

Exploring the heritage of Cuban music in Santiago de Cuba 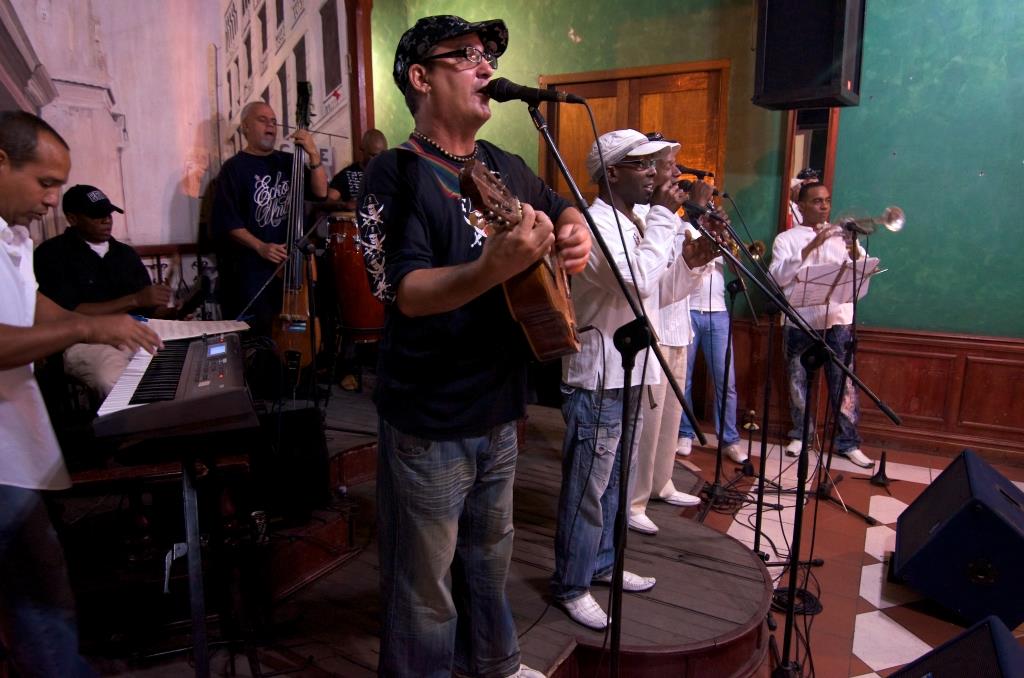 One of the most unique forms of Santiago’s musical heritage can be traced back to colonial times. In the late 18th century, unrest in Haiti (following the French Revolution) prompted many French land owners to flee to eastern Cuba, taking their African slaves with them. This led to the emergence of Afro-Haitian culture in the eastern provinces, heavily influenced by French dances and West African drumming. Out of this mix arose Tumba Francesa, now recognised as having UNESCO intangible heritage status, and performed only by a small number of groups.

Tumba francesa involves a lot of characteristic drumming. It also features a chorus of female singers singing in Spanish or in French patois. The main instrument in tumba francesa is the tumba: a drum similar to the conga. Dancers in colourful clothing reminiscent of 18th-century fashion often accompany the musicians in a stylised dance based on French court dances of the period.

The main traditional music genre that you are bound to hear in Santiago de Cuba is Son Cubano. Son contains a blend of African and Spanish musical elements, with an eclectic mix of musical instruments, including percussion instruments such as claves, bongos and maracas. The distinctive sound of the six stringed tres guitar is unique to Son music. Songs often talk about the everyday life of local people, with cheeky or risque storylines and a call and cry chorus. Soneros, as the lead singers are called, often improvise when singing but never miss a beat. 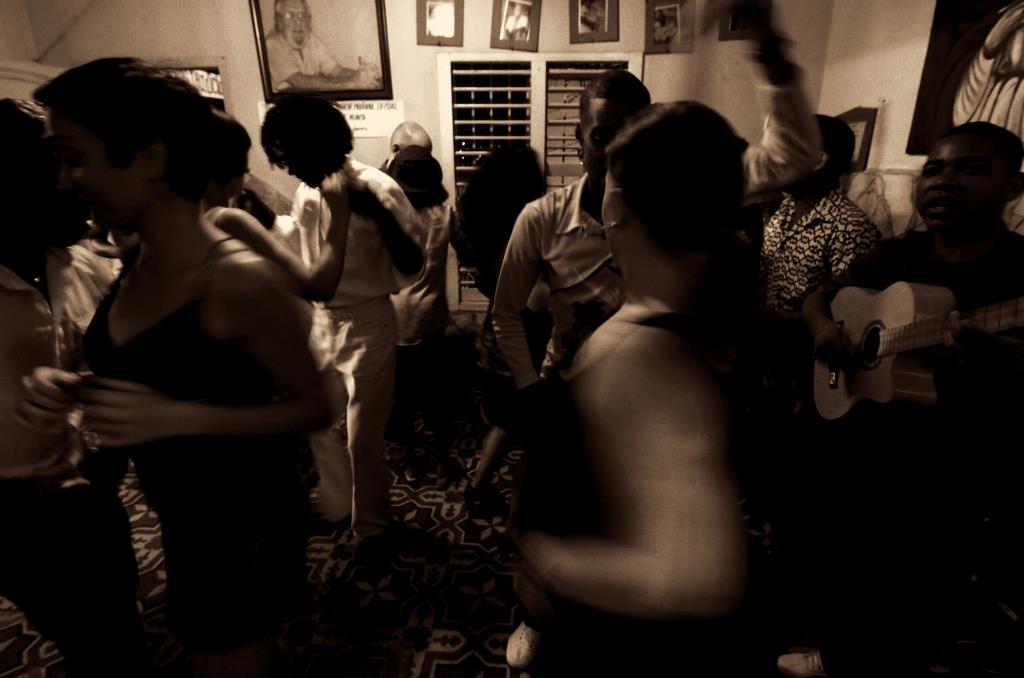 People dancing at a music venue in Santiago de Cuba

Music permeates daily life in Santiago de Cuba. Almost everyone in the city can play an instrument – be it the guitar, maracas, conga drums or any other traditional instrument. Besides watching musicians playing in the streets, you can also enjoy traditional Cuban music at the city’s live music venues.

There are several music venues in Santiago de Cuba where you can listen to traditional Cuban music. Many local bands perform at Casa de la Trova, the oldest traditional music club in Cuba. Located in the heart of the historic area of the city, this music venue is a colonial building with a high wooden ceiling and a long balcony running outside the length of main performance room on the first floor. If you visit the club in the afternoon, you can hear musicians playing in matinee shows while enjoying a cool drink in a quieter setting.

Another great place for live music is Casa de las Tradiciones. Decorated with colourful artwork, this small bar hosts local singers and musicians. Many people come here to enjoy the live music and dance the night away in a traditional neighbourhood, with dancers whirling on the dance floor right next to the band.

You don’t need to be a seasoned dancer to hit the dance floor. Most music venues in Santiago offer a welcoming and laid-back environment. Just order a mojito or two and let your body move to the rhythm of Cuban music.

Playing in a Cuban band 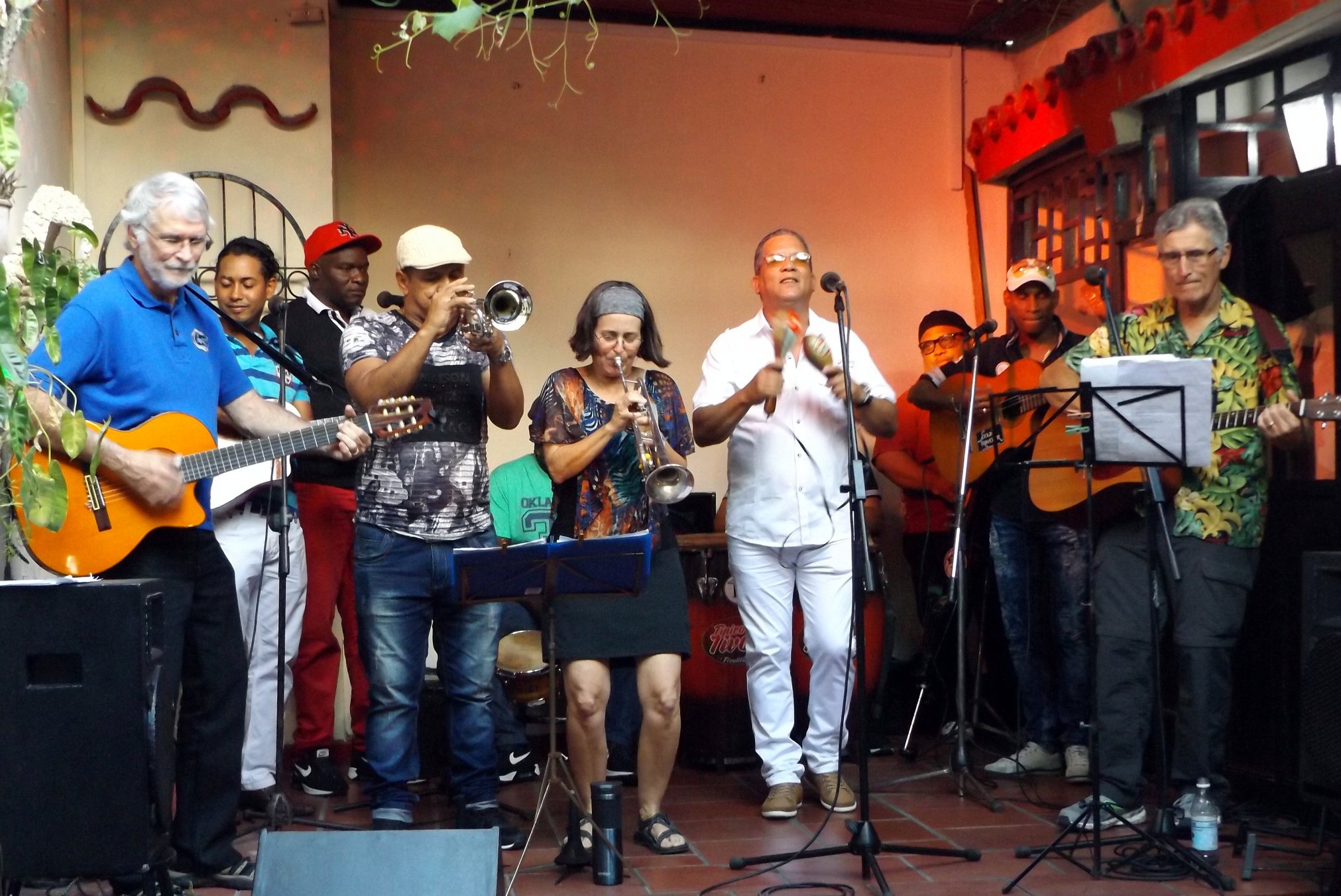 Want to learn how to play Cuban music? Join a music class! A music holiday in Santiago de Cuba gives you the opportunity to take masterclasses to improve your music skills and play with your tutors as part of a band. The masterclasses are delivered by professional Cuban musicians and singers in small groups or one-to-one sessions. If you want to work on your vocals, you can take singing lessons too.

If you have a passion for Cuban music, this is your chance to learn how to produce those beautiful rhythms. The masterclasses culminate in a live group performance with your tutors. That’s right – you get to perform live on stage at one of Santiago’s music venues (see photo above).

Going behind the scenes of Cuban music 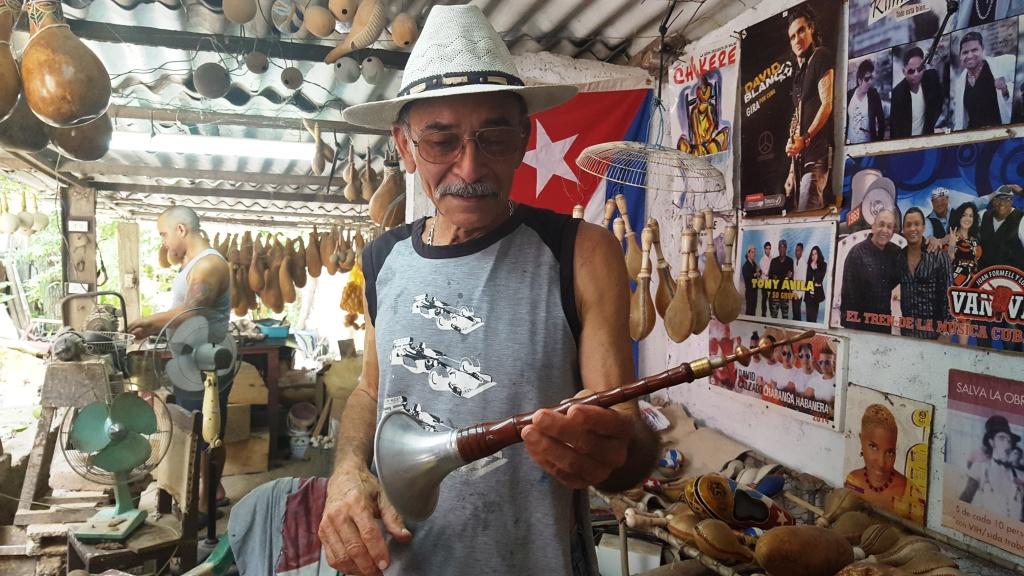 Harlem Campos in his workshop in Santiago de Cuba.

Your journey through Santiago’s music scene wouldn’t be complete without a trip to Harlem Campos’ workshop. For many years, Harlem Campos has been making instruments for Cuban musicians. Some of the best known bands (Los Van Van, Havana d’Primera, Septeto Santiaguero) play on Campos’ beautifully hand crafted instruments. You can visit him at his workshop on the outskirts of Santiago. Harlem even grows gourds – a hard round shelled fruit  – in his own garden, which he uses to create maracas. If you want to take home a souvenir of your Santiago music experience, you can buy a handmade instrument from Harlem’s workshop.

Finally, take a trip to the EGREM recording studio. Founded in 1964, EGREM is a government-owned recording label with studios across the country, including two in Havana and one in Santiago de Cuba. Many top Cuban artists, including son and salsa musicians, have recorded their music at an EGREM studio. A tour of Santiago’s studio walks you through the recording process and musical heritage of Cuban music in Santiago de Cuba. This is also an opportunity to learn more about the artists who have contributed to the popularity of Cuban Son and other music genres.

Our music holiday in Cuba offers a truly immersive experience of Santiago de Cuba’s music scene. You spend your morning improving your playing  under the tutelage of professional musicians, and your evenings watching Cuban bands play at a local music venue. Local visits and cultural activities are scheduled for the afternoons. Our annual March trip coincides with Santiago’s Festival de la Trova, which celebrates traditional Cuban music with a range of scheduled concerts. We also have a music holiday running in November 2019. Contact us on info@caledoniaworldwide.com

The following video will give you an idea of just how special our Cuban music holiday is.