The following is feedback from the recent Antibes French school trip undertaken by St George’s School for Girls in Edinburgh.  Both girls are very upbeat and enthusiastic about their stay in this beautiful part of France, and reading their comments makes us really happy to have been able to organise their trip. It makes our work all worthwhile!

Feedback from Student 1 – “we had fun learning”

‘As part of Upper Four Outreach Week, the French Department led a six day long trip to Antibes, in the south of France. The group of seventeen girls, which was joined by Mrs. P and Miss Gr, departed from Edinburgh Airport on a Saturday morning. We touched down to beautiful sunlight in Nice a little over two hours later.

Although we flew in to the city, our final destination was the small banlieue (suburb) of Juan-les-Pins. After a short coach journey we arrived at our sea-side hotel and spent the rest of the day settling in and exploring the area. We were also greeted by Virginia, who was to be our animatrice for duration of the visit.

Throughout our visit, we spent time in a local language school. The school was a five minute bus journey or fifteen minute walk from our hotel, and we ate breakfast there on school mornings. Many other students from Italy and Germany, amongst other places, did the same so this was a good chance to socialise and make new friends.  After eating we were separated into two classes, each taken by a French teacher, where we had fun learning a variety of vocabulary and new verb tenses. We even got to sing some songs! On the last day of school we visited the town centre and interviewed a number of local inhabitants as a speaking task. It was quite scary beforehand but we were all proud of our efforts afterwards.

On days that we weren’t at school we went on trips, often by train. One of these trips was to the old town of Nice. We were given a short tour from Virginia (in French of course!) before spending our free time shopping and exploring the city. We also went to the principality of Monaco by train. The first thing we did there was visit the palace of Monaco, even though it was a very long climb up the hillside to reach it. From the palace we had a breath-taking view over the whole of Monaco – we could even see where they were setting up for the Grand Prix. Later that day we also visited the Musée Océanographique, a famous aquarium. Some of us took a lot longer than others to look round but we all got some fantastic pictures.

Grasse was a nearby town, famous for its beauty and Festival of the Rose, which we decided to visit on Thursday. When we arrived they were setting up for the festival and so the fountains and streets were filled with flowers. Grasse is also famous for perfume. We were given a tour of the Fragonard Perfume Factory and taught about how scents and essential oils were produced from plants. It was very interesting, and, at the end, we were given time to look round there shop and buy perfume if we wanted to (many of us did!).

On our final night, we held a talent show on the beach. Each dorm had been working very hard on their act and the competition was tough. After the winners had been congratulated we stopped at a café for one last ice cream before leaving Antibes. Although we were sad to leave forEdinburgh Airport the next morning, we have all taken a lot from the experience, and most of all had fun showing our other friends and family hundreds of holiday photos – each with a huge explanation to match!’ 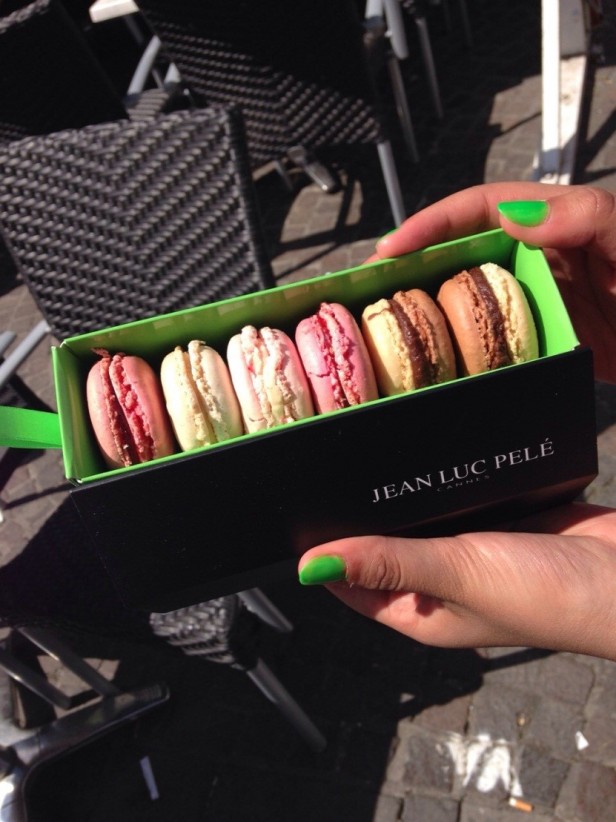 Feedback from Student 2 – “we had a great experience”

‘On Saturday the 2nd of May 17 girls flew to Nice international airport accompanied by Mrs P and Miss G. We were greeted by our guide Virginia. Then we were taken on a coach to Juan les pins, and the hotel. The hotel was close to the sea and even though it wasn’t always sunny , it had one of the best views! The patio there, was also very cute.

On the first day we went on a long walking tour of the beautiful city of Antibes and we managed to get some magnificent views. The next day we all went on a train ride to Nice and went to a beautiful beach that had no sand but lots of stones. Then we went to the museum of modern art where we saw some very interesting sculptures and paintings. The view at the top of the museum was spectacular and so beautiful. On Monday, Tuesday and Wednesday we went to school. We were split into two groups in one of the groups we learnt tenses such as imperfect, future etc…. In the other group they learnt body parts, clothing and verbs. On the Wednesday we got to go into the old town and talk to French people and ask them questions from our survey for school, obviously our French was not as good as theirs!

Later that day we caught a train to Monaco which is said to be one of the richest and second smallest country in the world. We knew we wouldn’t be able to afford anything there! Monaco was such a neat country with lovely buildings and clean streets. In Monaco we climbed up 76 steps to the prince of Monaco’s home.  Then we went to the Museé Oceanographique where we saw some amazing fishes and sharks.

The next day we went to Grasse on a train, and we went to the Fragonard perfume factory where we learnt about how they produce perfume and we also managed to buy some with our last remaining euros. Every night we would walk up to Castel Arabel where we would get our dinner; they had a swimming pool and a ping pong table. In Castel we made many friends from Italy, Switzerland and even Russia. On the last day as a farewell to our tour guide Virginia we had a little show about our overall school trip experience in Antibes. We sang and we danced but it was a bit embarrassing!  Overall we had a great experience and would love to come back again sometime.”

If you are interested in more details please get in touch with us on 0131 621 7721 or groups@caledoniaworldwide.com to discuss your school trip to France.

Kath Bateman founded Caledonia in 1996 and still has a very active role in the company. As a linguist and avid traveller, Caledonia brings together many strands of Kath’s personal and professional interests. She is a Modern Languages and Tourism graduate and has worked as a tour leader and trilingual guide, ski rep and salsa teacher, cultural events organiser, salsa club promoter and English language teacher. She lived and studied in France and Austria and has travelled widely elsewhere in Europe, Latin America and particularly in Cuba. Kath is still very much involved in the business and is as motivated by what Caledonia does as when she first set up the company in the spare room at home all those years ago.

We organise and promote socially and culturally aware travel, and strongly believe that our trips provide a unique and authentic way to be involved with local people when travelling. We encourage our clients to learn more about the cultures, traditions and way of life of the local people as well as explore and respect their surrounding environment.

All you have to do is contact us to tell us what you would like to book or to ask us for more information. Once we confirm availability and how much it will cost, we will send you a booking form by email for you to complete with your personal details. When we receive your completed booking form and deposit, we will confirm the booking. Easy!